Hungarian Astrophotographers' Association>Pictures of the Month 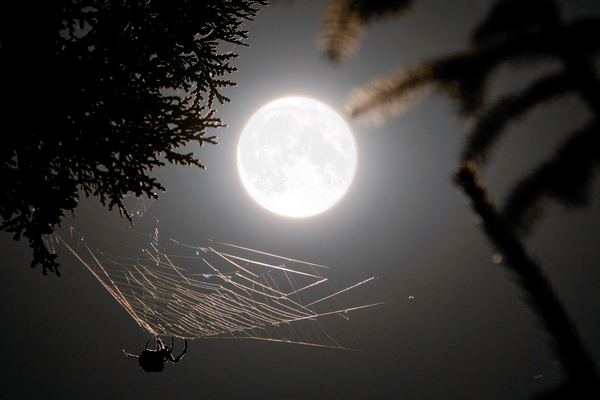 No matter how strong the web, the spider couldn't catch our celestial companion (fortunately, It would have been awkward). For me on the other hand it was an opportunity to capture a really special view. To show the Moon and the environment on the same image It was necessary to mask together images with shorter and longer exposures. 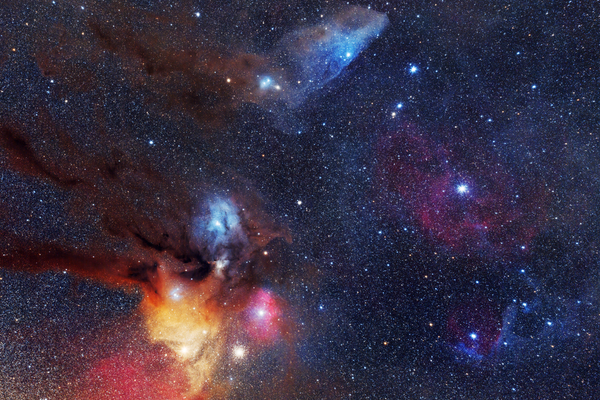 Antares and its surroundings

The Antares region, the Blue Horsehead Nebula, and countless spectacular objects whose names I don't even know are all in the field of view of the Samyang, the only issue is that it is almost impossible to capture them from Hungary. They are only visible for a short time and too close to the horizon. I like to push the boundaries, and when I took this picture, I was curious about the lowest possible location to take photos from the higher observation field in Törökoppány. Antares reaches its culmination at about 16 °. The tree branches just did not hang into the composition. Seeing the first pictures, the question arose - why am I wasting my time? Then, the higher the target crawled, the clearer the raw images became, and after half an hour, the blue reflection nebulae loomed. 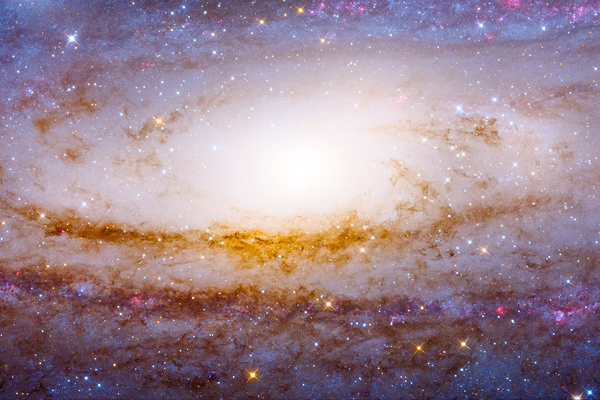 The Andromeda Galaxy, also known as Messier 31 (M31), is the largest member of the Local Group, which also includes our own galaxy, the Milky Way. Looking at it from afar, we could observe the billion-year orbit of the two galaxies, as they are in gravitational relation to each other. The Triangulum Galaxy (Messier 33) is also involved in this game, and in a few billion years the three spiral galaxies and many companion galaxies will merge into one huge giant. But this event is so far in the future, that it certainly will not be observed by man from Earth. However, we are now in a privileged position, as we have an excellent view of the Andromeda Galaxy from the northern hemisphere. No wonder that every amateur astronomer and astrophotographer tries to capture this stunning object, even in the early stages of their career in astrophotography. Exciting details and characteristic shapes appear even at low magnification. Under good conditions we can even see the brightest part with the naked eye. 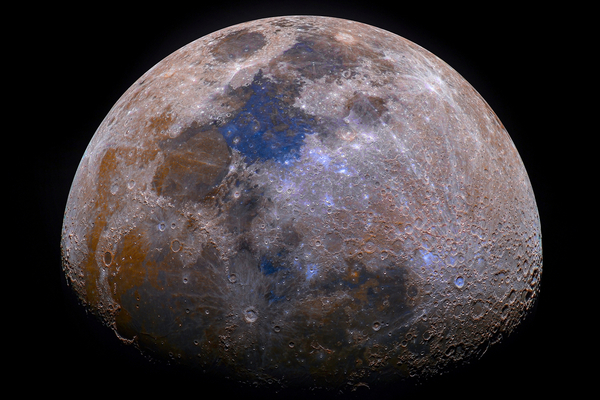 I rethought my Moon composite image and reworked it. Thanks to the plethora of images, the fantastic sensor of the full frame Nikon Z6, and the apochromatic binoculars, I got an incredibly detailed image from which I was able to bring out the colors in detail as well. 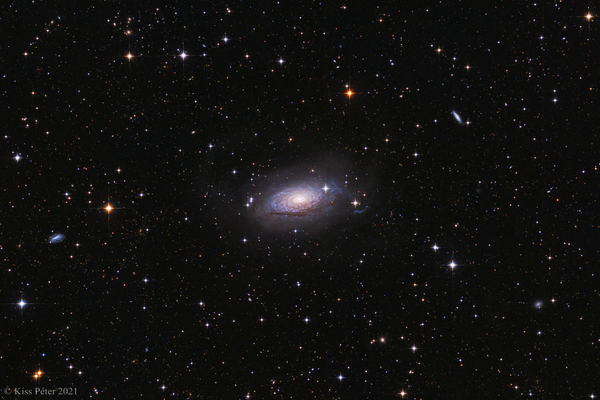 An image that took two springs to capture and a year to process. Okay, while it did not take me an entire year to process, I never managed to make myself pleased with the result. This was my first image, where the core of the galaxy is a lot brighter than the background, and I couldn’t make both look nice. But what are friends good for? It was Péter Feltóti who got me up from the downs, telling me how he solves this problem and in the end with some playing around I managed to figure out my own method. Thanks again! Messier 63 for me is one of the prettiest galaxies, although it doesn’t stick out of the field of view in this arrangement, but there is enough to look at in the background. 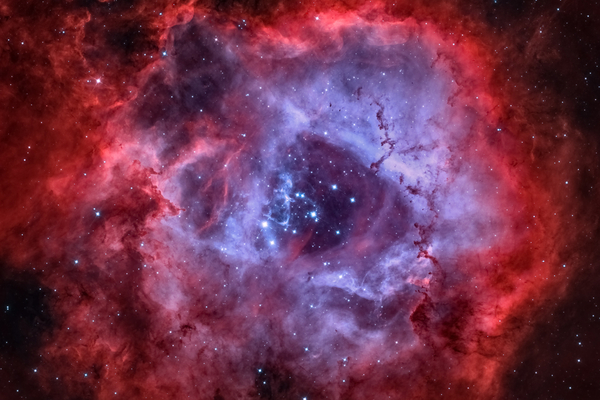 The Rosette Nebula has been my favourite object for a long time. I’ve already taken a traditional photo with my DSLR camera of it, that’s why I was curious, what can I achieve with a CCD camera and narrowband filters. I didn’t have an exact plan, I only knew, I didn’t want to take another ‘traditional’ Rosette photo. The seeing wasn’t unfortunately particularly good, rather worse than average, so the final image was less detailed than expected, but the proper integration time allowed me to experiment with the lights and the dynamics of the image. I couldn't reduce the stars without compromise either, but in the end I managed to achieve the visual effect that, I can say, is different than before, but is still authentic to the human eye 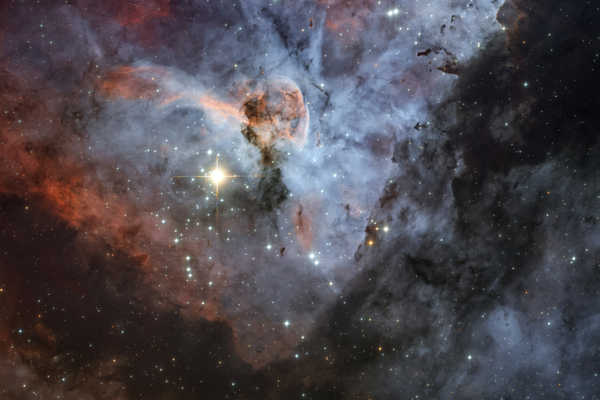 In late January and early February 2021 I collected enough data for an image with a robotic telescope in Chile. The star Eta Carinae and it’s neighbourhood had seemed an interesting and quickly imageble region, so I returned to it with a different concept. I got different colors than usual by mixing the RGB and the narrowband material, which I tried to present in a natural and restrained way. 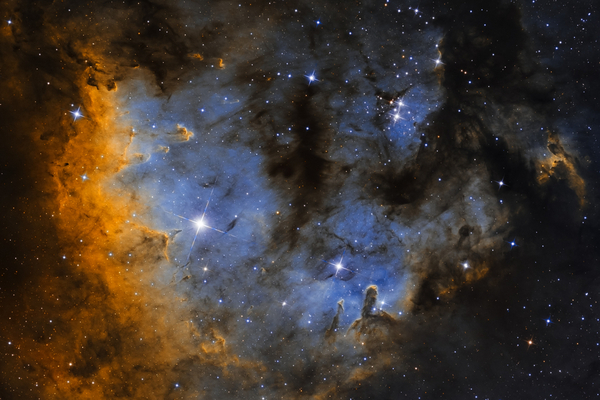 I’ve wanted to capture this area for a long time because it promised to be very interesting with narrowband filters, like the ones Hubble Space Telescope uses. I’ve almost given it up this season, but in the evenings it was still high enough for a few hours, so in 5 nights, when there was a small break between the clouds, I finally gathered the necessary 26 hours of exposure time. Unfortunately, some of the raw pictures weren’t taken under a very good sky, but the characteristic columnar shapes of the nebulae began to emerge nicely, and the whole star-forming region appeared. The dust nebulae are particularly faint, so they required special attention, as there are many beautiful details hidden there, that can be shown. 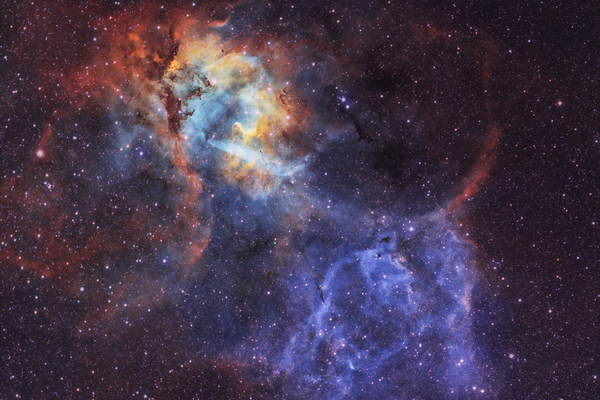 I tried to capture the emission nebula Sharpless 2-132 with excessively low surface brightness as detailed as possible. I exposed for 21 hours in total. I used narrowband filters to take the image. The nebula is intensively visible on the image, as opposed to the raw files in which the detail shows itself very faintly. 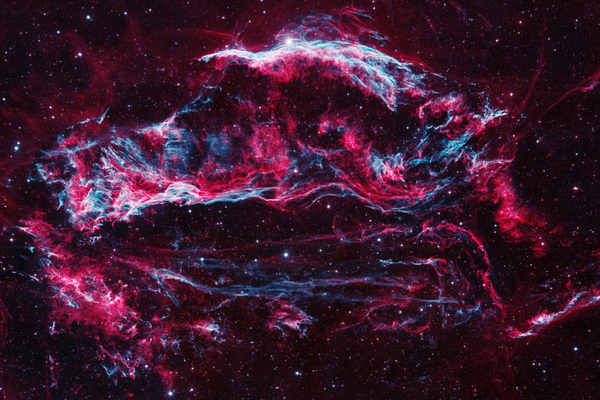 This summer, I committed myself to capturing one of the most popular objects in the summer sky, a supernova remnant called the Veil Nebula as spectacularly as possible. The key to this was to put this relatively large object together from high-resolution mosaic panels. The result shown in the picture was cropped from six panels.(Péter Feltóti) 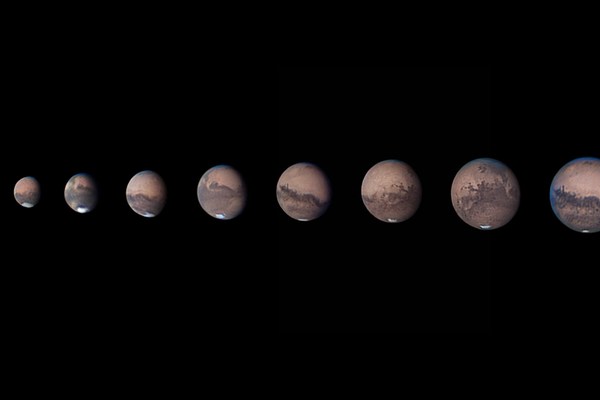 The 2020 Visibility of Mars

My series of Mars images were taken from the Corona Borealis Observatory in Győr, between the 4th of April and 8th of October 2020. The diameter of the planet increased from 6,5 arc-seconds to 22,6 arc-seconds over the past half a year. The seeing varied highly between 3/10 and 7-8/10, so the equal normalization of the images was the main task. For a long time, I have been planning on capturing a Mars opposition and visibility at the right altitude, the first half of which you can see right here. At the dawn and dusk edges of the planet, the ground level fogging and cloud formation is well recognizable, just like the spectacular Olympus Mons and its caldera. The series together, also showcases the martian seasonal change and the polar ice caps shrinking due to, it can also be studied. (Zsolt Kereszty) 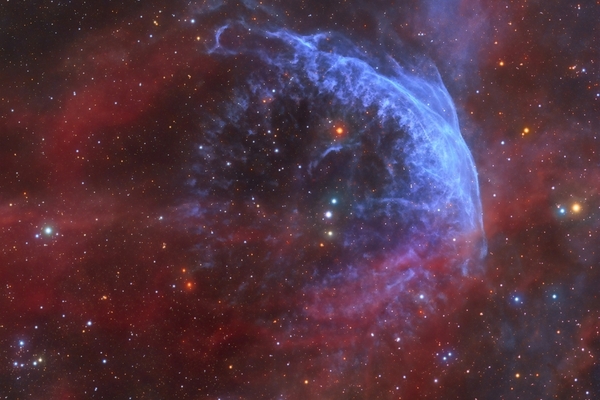 Wolf-Rayet 134 in the constellation Cygnus, not far from its famous relative NGC6888, the Crescent Nebula. The structure is similarly exciting, but all in all a lot fainter. It really prevails with an OIII filter, but in spite of the narrowband, it’s probably worth imaging under dark skies for the whole iris-like structure and the more diffuse parts to come out well. Processed as a HaOIIIRGB composite. 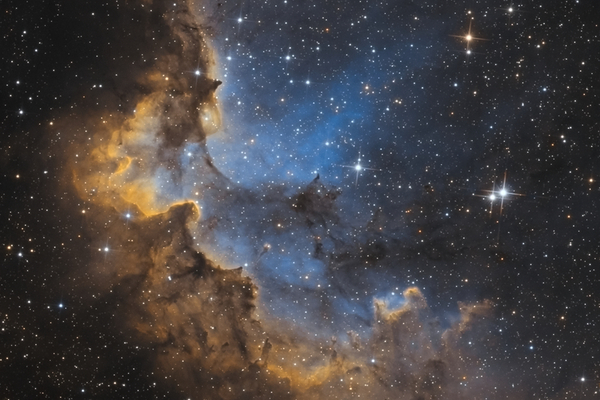 The raw data collected so slowly for the Iris Nebula that another narrowband project has been completed in the meantime. The processing was quite exhausting due to the small size, and massive star field even in narrowband but I hope it turned out acceptable. 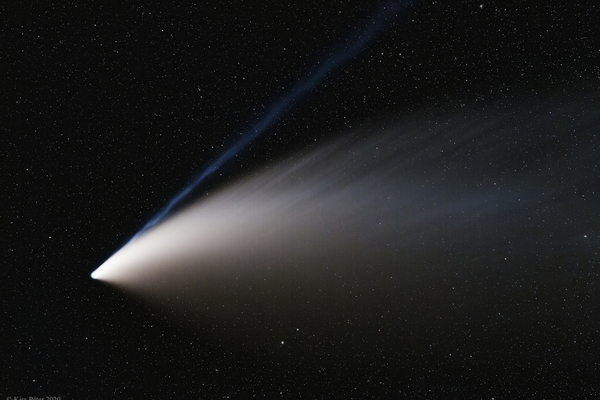 I was lucky enough to be able to take this picture of the comet NEOWISE. Originally I didn’t even plan to deal with it but on monday some of us went to Belecska despite the uncertain weather and there I realized how beautiful it looks. I couldn’t miss it! After some improvisation I started the exposures and managed to collect about one hour of good-quality raw images. The processing was a struggle because the large field of view, the background stars barely moved, which resulted in trails in the integrated picture. The difficulty was handling these trails in a proper way so that the end result would be aesthetic. 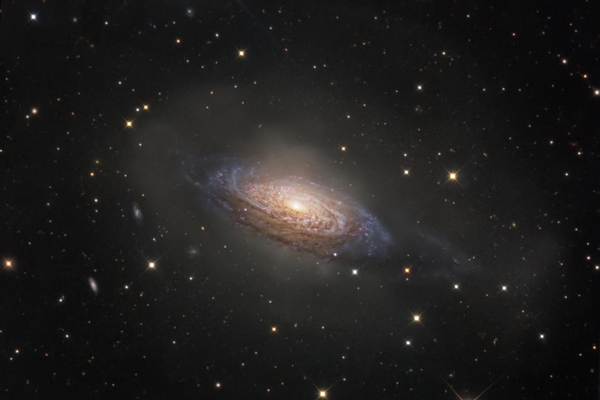 I turned my attention to the NGC3521 galaxy, previously unknown to me, due to a call. Being a relatively small object compared to the field of view of the usual astrophotography equipment, I thought about some other possibilities I have. I have already tried my 20 cm diameter, long focus, classic cassegrain telescope for photography, but the original F/12 brightness resulted in a very soft image. Then I came up with the idea to reduce the focus with a reducer, but I only had my Newton-optimized ASA 0.73 corrector at home to use. Looking back, it wasn’t a bad idea to choose this. I need to add, that, however much COVID-19 took away from being able to go outside, it gave back the same amount for image taking. I’ve never seen such clean, transparent skies from Vecsés as that set in with the disappearance of planes and other polluting dusts during the time of the pandemic. 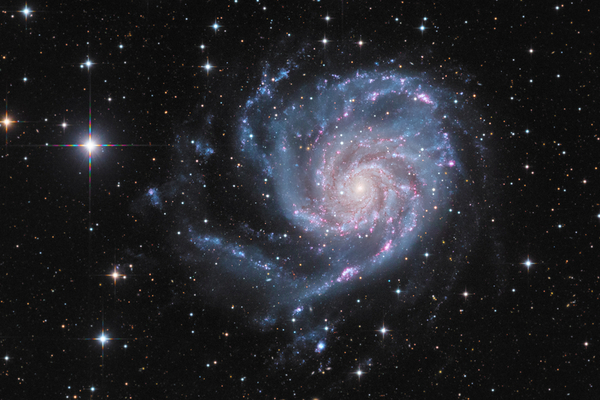 The M101 galaxy is a popular target for all astrophotographers from beginners to the most experienced. It is relatively bright, so it quickly gives you a sense of success but with a little more effort the faint parts will emerge from the background as well. Its detailed nucleus and the bright and extensive HII regions also provide a great amount of opportunities. Perhaps this is why we know a thousand faces of this galaxy, and each of us processes it differently. I’ve also made different versions but after a long philosophical discussion and several Pixinsight calibration I decided (with the help of Patrik Tarczi) to process it in a more muted, less popular way. Of course if you have a relatively good raw material at your disposal you can’t help bringing out the maximum of it. Yet now I decided to finalize a ‘quieter’ version. 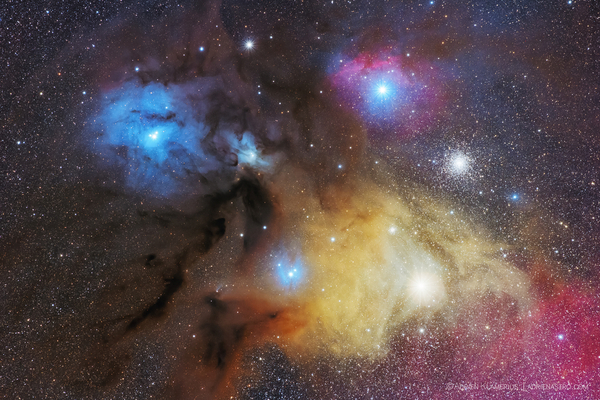 The Rho Ophiuchi region is an area rich in colors, for which I collected exposure time from Namibia back in 2018. Unfortunately there are a lot of stars here (too), so it was a struggle to try and bring out as many details as possible from the sea of stars, and setting the color balance was even harder. Next time I travel to the southern hemisphere I will definitely mosaic this beautiful area. 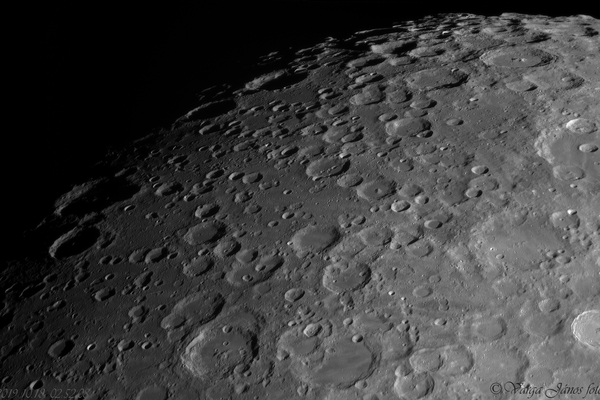 Southern craterfield of the waning Moon

The image of the Month in March 2020: An excessively sharp photo depicting a part of the Moon’s surface, the southern crater field. 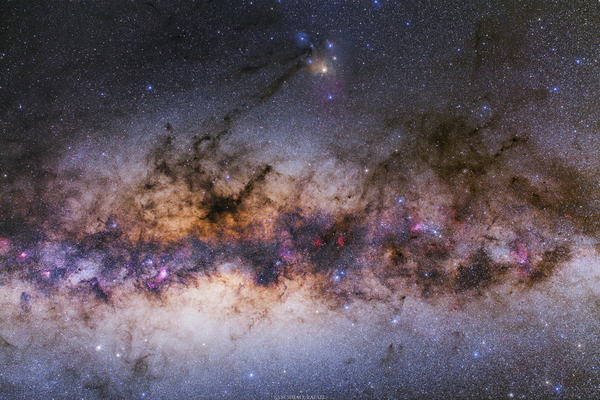 Centre of The Milky Way

This is an image from Namibia, the concept behind it was simple... keep the rig working. No matter what, keep it working and imaging. Actually I’ve imaged the galactic core with every lens I had with me at the time. I have already uploaded the one with the 50mm, the 14mm and now this is the one with the 24mm on an APS-C sized sensor. These aren’t a perfect pair however, as the corner’s show a little coma. 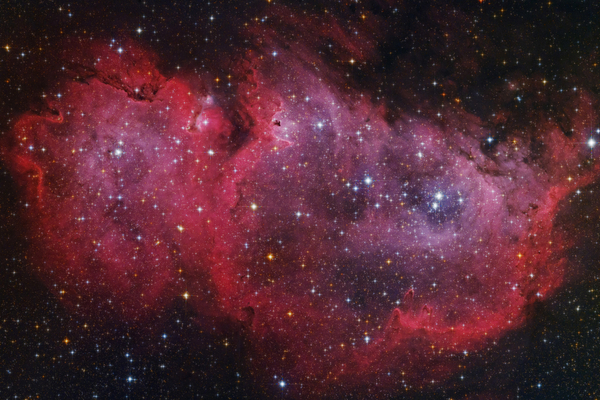 Encouraged by the last year’s Andromeda mosaic, I decided to make a mosaic image in 2019 as well. The Soul Nebula was the right option because it could be made in two vertical panels, but I raised the stakes and used LRGB technique because of the dense star field. I had six clear nights, 2x2 nights for the UHC-filtered images from Pilis and 2x1 for the RGB images from Ágasvár. I could manage the star field better with the help of the UHC-layer but all in all reducing the stars was an immense job. In the end I’m satisfied with this image, but with all this RGB-mosaic, UHC-mosaic and LRGB-technique the post-processing was a long and tiring work. By the time I have finished, the size of the folder was 310 Gigabyte!